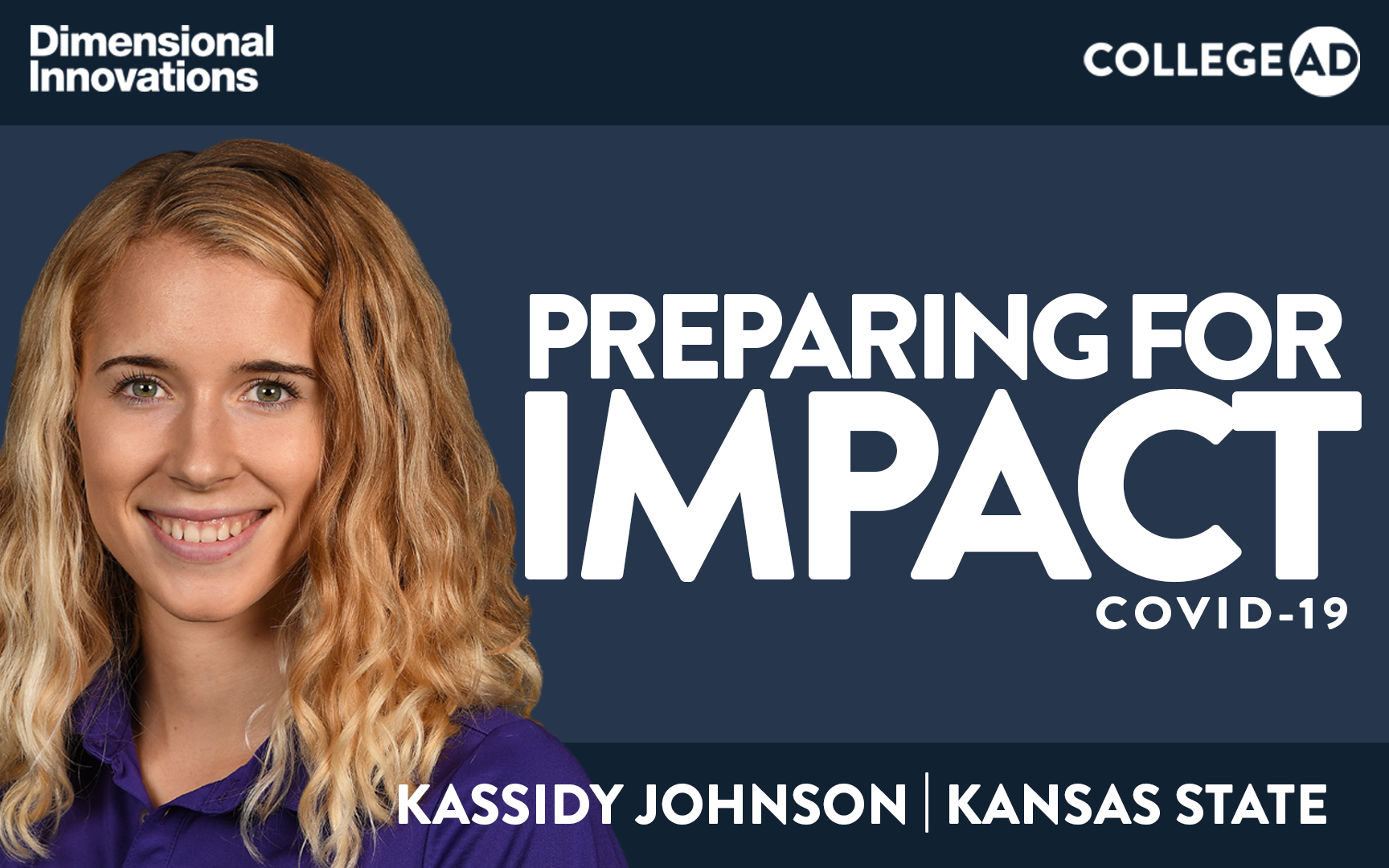 Kassidy Johnson, a track and field student-athlete heading into her fourth year at Kansas State University, sat down for a conversation with Dimensional Innovations Practice Director for Collegiate Sports, Drew Berst for a one-on-one conversation. The pairs conversation centers around a student-athlete perspective on the pandemic, the social and cultural movement of Black Lives Matter, and the Name, Image, and Likeness debate.

The conversation started with Johnson explaining that she’s always played sports but really got into track and field in middle school. She found success early on and that helped her stick with it. Now she runs middle distance 800M, 100M, Mile indoor and 800M and 1500M outdoor, plus cross country. She says her days are busy with up to two practices a day, plus class and homework.

Kassidy Johnson, who’s double majoring in Dietetics and Spanish, explains that she does not run track for the attention so it doesn’t really bother her that football is the often the most discussed sport, but she says it is obvious, most of the time, where the priorities are. She says that she and her fellow student-athletes understand that football is a main economic driver within athletic departments and says track and field would not function without football. Johnson says if football doesn’t happen because of COVID then track probably won’t happen, so she and her teammates have never wanted football to happen more.

Next, the conversation turned to COVID and the impact it’s had on her and her campus. She says that she lost her spring season, which she won’t get back because she already red-shirted, so to get this season back Johnson would have to stay for a sixth year which doesn’t make much sense for her at this time. She explains that missing that season is unfortunate but there were bigger issues in the world, so she understands the reasoning. Johnson took her classes online for the remainder of the semester and says it was odd but it was nice to be on her own schedule. She says she thinks things will be different going forward if they have a season this upcoming year. She understands the goal is to drive to as many meets as possible, to reduce costs, so they may not make it to the larger meets that are further away like the team normally would. She says their first meet is scheduled for September 6th and they are scheduled to start practice on August 29th, but she has trained on her own during this time.

Johnson says she’s not worried about having COVID-19 herself, but she is worried about having it and unknowingly passing it on to other people. She says that she holds on to the idea that it doesn’t impact younger people as much, but she feels she has a responsibility to protect other people and she does wear a mask in public places to limit possible spread. She does see that some of her peers across the country aren’t taking the risk as seriously and believes that is because most young people think it won’t kill them and they have the mentality that it ‘won’t happen to me.’ Kassidy Johnson says some young people may have lost sight of the point that restrictions are really in place to help others, something she doesn’t want to lose sight of.

Johnson says the plan at Kansas State is to be back in class by August 17th.  She says, at this point, if everyone thinks it is safe to go back to class, she can go along with that, but her outlook may change if cases start to rise. She says she’s leaving it up to the people who make the decisions on campus. However, she understands that bringing people back to campus will pose a higher risk and points to cases among the football team. She says having a percentage of the class full, like the Ivy League announced 40% capacity in classes, makes sense to her and she thinks it does lower the risk. Johnson explains she would find it odd to be competing if they weren’t holding in-person classes.

Next, they discussed some of the student-athletes testing positive and she says she hopes they recover and aren’t too sick. She also explained that that going into quarantine mid-season or at the beginning of the track and field season will be tricky, especially since they are going back to campus close to when their season starts. Plus, since the team is small, if one of them is out, the team is pretty much out and that could cause issues for competitions. Johnson says it’s hard to weigh her desire to compete against her desire to stay safe from COVID. She says if everyone thinks it is possible to be safe, then she wants to compete and be as responsible as they can, but she realizes a season of cross country is much smaller than losing lives. She says she trusts the leaders making the decisions and will couple that with personal responsibility.

Johnson explained that budget constraints and health constraints may make things challenging, but doing whatever she has to do to compete would be better than not competing at all. She says she only has two seasons left and really wants to see what she’s able to do in those seasons, even if it means sticking to regional meets. Having meets without fans cheering her on will also make a difference to Johnson, who says she finds people in the stands motivating. She does say she is willing to compete without spectators for safety reasons.

Then the conversation turned to the Black Lives Matter movement sweeping across the country. Johnson said that one of the things she loves about athletics and track is how diverse the team can be. She says she cherishes learning other people’s perspective and getting to know different cultures. Johnson says, as a white person, she’s recognized her privilege in the past, and now with the BLM movement she’s learning so much from the men and women of color around her who’ve shared their perspectives, she feels she’s learned so much from them sharing their experiences. She and a few of her teammates are staying together in Manhattan (Kansas) and training, she says the BLM movement has led to conversations among her teammates; sometimes the conversations get uncomfortable, but Johnson says that’s necessary. She’s also talked with her coach about diversity and it’s opened up a lot of discussions.

She says social media has been the main way she stays aware of what’s going on with the BLM movement, she explains that the uproar online has been helpful to understand people’s perspectives on the protests. She says there have unfortunately been some examples of racism at K-State, she was happy to see that the athletic department put out key points on advancement. Johnson says she appreciates the action from the department instead of them just making statements. She explained that one of the points was diversifying the hiring pool, which she thinks would be beneficial to match staff diversity to athletes’ diversity. She says she’s also happy to see that K-State is making inclusion and diversity programs mandatory yearly for student-athletes and staff. She says the biggest thing as a team is to use their privilege, if they have it, to support people of color by using their voice, going to peaceful protests, and showing empathy and understanding.

Then Drew and Kassidy began talking about NIL. Johnson says she’s tried not to look too much into the discussions until something concrete is passed. From her perspective she sees it benefitting everyone and does not see the harm in allowing student-athletes to benefit from their own NIL. She says it would make things a lot easier, and pointed to her participation in the podcast as being hoops to jump through to participate. She says she’s all for it because it would mean she wouldn’t accidentally violate any rules and it would make things easier. Johnson says it may further the divide between football and basketball players and the rest of the student-athletes, but at the same time, she sees that other sports could benefit from their success. She says even with all of the unknowns on NIL, she feels a step in the right direction is still a good thing. Johnson explains that even if you had a successful social media presence on business on the side, while it would add to the workload and stress of campus life, it could also be a welcome distraction for many of her peers that get stuck just purely focusing on workouts and schoolwork, it could be a creative outlet.

She says that as a dietetics major, her social media accounts center around food and well-being. She explains that brands have reached out to her to feature products or to become a brand ambassador and she’s had to turn those opportunities down because of her status as a student-athlete. Johnson says these brands do not reach out to her because she’s a student-athlete, instead because she has a food page. She says it‘s an example of how these opportunities are available to the general population, but not to her because she is a student-athlete. She points out that she wouldn’t necessarily benefit from being a student-athlete, but she would be able to grow her own personal brand completely separate from being an athlete. Johnson believes that ultimately that the social media aspect of NIL has the potential to benefit both the university and student-athletes.