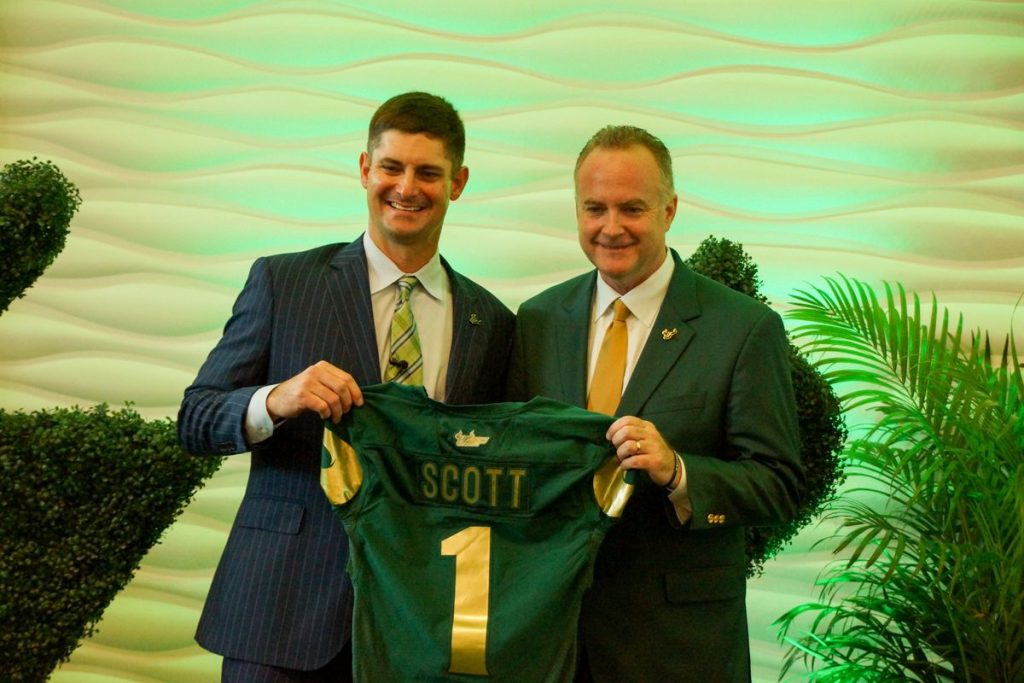 “I have a lot of respect for the search firms, but it just felt to me that with the swiftness that I needed to work with, and the confidence that I had in different contacts that I had, that I could trust; the support of our president and the people that I could rely on here in Tampa, I just felt it was the swiftest way to go for us.” -Michael Kelly, USF Vice President and Director of Athletics

Swift is right. USF AD Michael Kelly realized that he needed to make a change to his football program in the wake of a 4-8 season. Less than 24 hours after dismissing Charlie Strong, the search began in earnest.

“There are a lot of things that go into that decision. It’s a very tough decision, but we had a tough trend on wins and losses. We had to look ahead to the future and also on what we had going in terms of our sales and donations,” Kelly explains. “We finished our season on Friday evening and evaluated on Saturday and Sunday, and then ultimately the decision on Sunday afternoon was to go with a change. Once that happened, it immediately started Sunday night with calls and outreach.”

But just because things moved quickly, doesn’t mean work and research was rushed, in fact, Kelly believed this was a golden opportunity for USF with incredible timing.

“It’s rare, but it’s also an opportunity that you have your football coach, president, and AD all coming in. The alignment was important; we wanted someone who had a proven record of success on the field and in the classroom. We wanted someone with proven ability and the willingness to engage and unite the campus community and the community at large; obviously showing the ability to recruit and develop student-athletes while they are with you. Lastly, our unique situation at USF is our relatively young program at 23 years. We are one of the youngest programs at the FBS level, and we’ve accomplished a lot. I wanted someone to have a lot of pride in that, but I also wanted someone who looks at this opportunity with this young program to leave a legacy, make a mark and take this program to the next level.”

The search to find someone who recognized this opportunity and aligned with Kelly’s vision would not be an easy one, but Kelly was determined to find the right fit for USF. He began to reach out to trusted friends and colleagues right away.

“Sunday, Monday, and Tuesday I spent a lot of time reaching out to people I trusted in the coaching industry. Probably about a half a dozen head coaches that I know and admire and kind of getting a feel for what they thought would be a good fit for our opening. But I also had people reaching out. Agents, coaches from college and pro ranks, and retired folks all reached out. That time was spent truly surveying and fielding a candidate pool.”

“That led to the setting up of long-form phone interviews and in-person interviews that took place from Wednesday through Sunday to get in-depth with people that had inquired that were of interest to us.”

Once a candidate was being considered, Kelly says numbers were factored in. His team did an analysis of the football aspect using Sports Source Analytics, something he was familiar with from his time at the CFP. After crunching the numbers, things began to come into focus.

“Everyone I spoke to I considered seriously because I was truly open-minded going into the process. You certainly have a shortlist of people in mind, but you never know if it’s the right fit or the right timing. So, I really did approach it with an open mind thinking there’s a lot of things that could be the right fit for us at this point,” he says. “From Wednesday through Sunday I probably conducted more than 20 phone and, or, in-person interviews that allowed me to whittle it down to ultimately making the decision that I did.”

That decision was Jeff Scott. Scott, 38, was co-offensive coordinator at Clemson University and Kelly knew he was the one despite starting this process with no preconceptions.

“We talked a couple times during the week then agreed to set up an in-person meeting, which lasted several hours. After that in-person meeting, I felt assured that he was the right fit for us. At the end of the day, I felt that coach Scott’s offensive focus and the energy that he’s proven to bring to the field and the type of points that are scored in this league, it was an area we were lacking. It ended up being a point of interest for us.”

Although Kelly didn’t use a search firm, and the final decision was his, he insists he was not in this process truly alone.

“I would check in every day with the president and our Chairmen of our Board of Trustees to give updates of what I was thinking. Ultimately, we were in full alignment and I appreciated their support. It was my decision at the end of the day, but I had good correspondence throughout the entire process and I feel that it’s important for our entire university leadership to be aligned.”