“I’ve chosen to operate with total transparency, sharing information that I have and there’s that balance between optimism and reality. I’m an extremely positive person, that’s what our department is built on, creating a positive experience for student-athletes, coaches, and staff.” – Stony Brook Director of Athletics Shawn Heilbron

Shawn Heilbron has not lost his optimism nor his laser focus on his department’s mission for the Seawolves student-athletes: keep them safe, informed, and first in decision making. 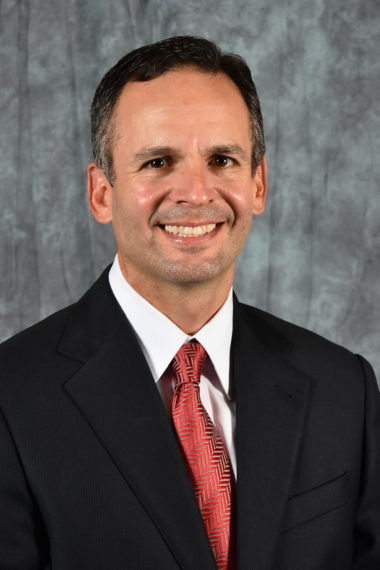 “I think you find yourself, during the COVID pandemic, on the roller coaster, there are highs and lows and so many unknowns. It’s trying to put some certainty amidst the uncertainly of what we are going to do. I focused on controlling the controllable.”

“This is unlike anything this generation has experienced,” Heilbron says, “the entire athletics community has really banded together. I’ve relied upon colleges across the country, those that I sit on the NCAA Division I Council with, those in the conferences I’m a part of, everyone is talking more than ever, and exchanging ideas. There is no playbook for this, we are riding this out together and depending on one another.”

That communication and comradery is helping Heilbron and his staff not only stay up-to-date but even ahead of what’s happening during these unprecedented times.

To be able to step into spaces with other athletic directors and commissioners, maybe you felt like you were treading on touchy subjects, well that’s all off the table. We are all trying to figure out how to survive, then we’ll get back to how we thrive.”

That exchange of ideas has resulted in his department’s latest initiative to help their student-athletes during this crisis, Seawolves in Need.

“The notion of how to raise money during a pandemic and the economic downturn is a challenge,” Heilbron explains, “but in time of crisis, it really is about people coming together. We have a hospital on our campus, and the first thought was how do we support our hospital? How do we raise money for our frontline workers? That became Seawolves in Need helping our students across the world.”

Money raised through Seawolves in Need will go directly to assisting necessary expenses resulting from illness to either the student-athlete or their family. It will also help with groceries, toiletries, academic supplies for online classes, or scholarships to support additional years of eligibility.

“We were able to create our own campaign for student-athletes. We announced we’d let our spring athletes return, it was the right thing to do, so yes, we have to raise money for that, but also to help our student-athletes that are struggling. The outpouring of support has been tremendous.”

Heilbron explains that the program grew from the department’s natural and unifying focus on the student-athlete. It’s the core mission they lean on day in and day out, not just during a crisis.

“Building a culture completely focused on the student-athlete experience. We were some of the earliest adopters of having in-house counselors for student-athletes. Moving a little ahead, at the time, of schools at our level with performance nutrition. It was really figuring out how to do these things without raising significant new revenue around the initiatives. Those were important for us, there’s human capital there.”

That focus on mental health and wellness has allowed his department to react to the current situation with speed and compassion, but he recognizes it’s still tough on students who are navigating unfamiliar territory.

“Our student-athletes are incredibly resilient, but they are struggling. We have created such an amazing family atmosphere at Stony Brook with coaches and support staff who care and support them every step of the way. That support system is hard to replicate over text and phone calls. They are positive, they are ready to come back, and they understand we will do everything we can for them while we are apart. They have trust in us; they trust that we will make the best decisions and communicate with them as we learn new information.”

He explains that it’s not always about the official measures or department initiatives that are put in place; rather, getting student-athletes through this time also depends on how his team approaches everyday interactions.

“What I’m driven by every day is [the mission] to help our student-athletes get to where they want to be in life. I believe our student-athletes, in particular, will have such a newfound perspective on really how fragile all of this is. It’s given them perspective, not only on life but in themselves, they can handle this, they can handle adversity and they can come out of this stronger.” 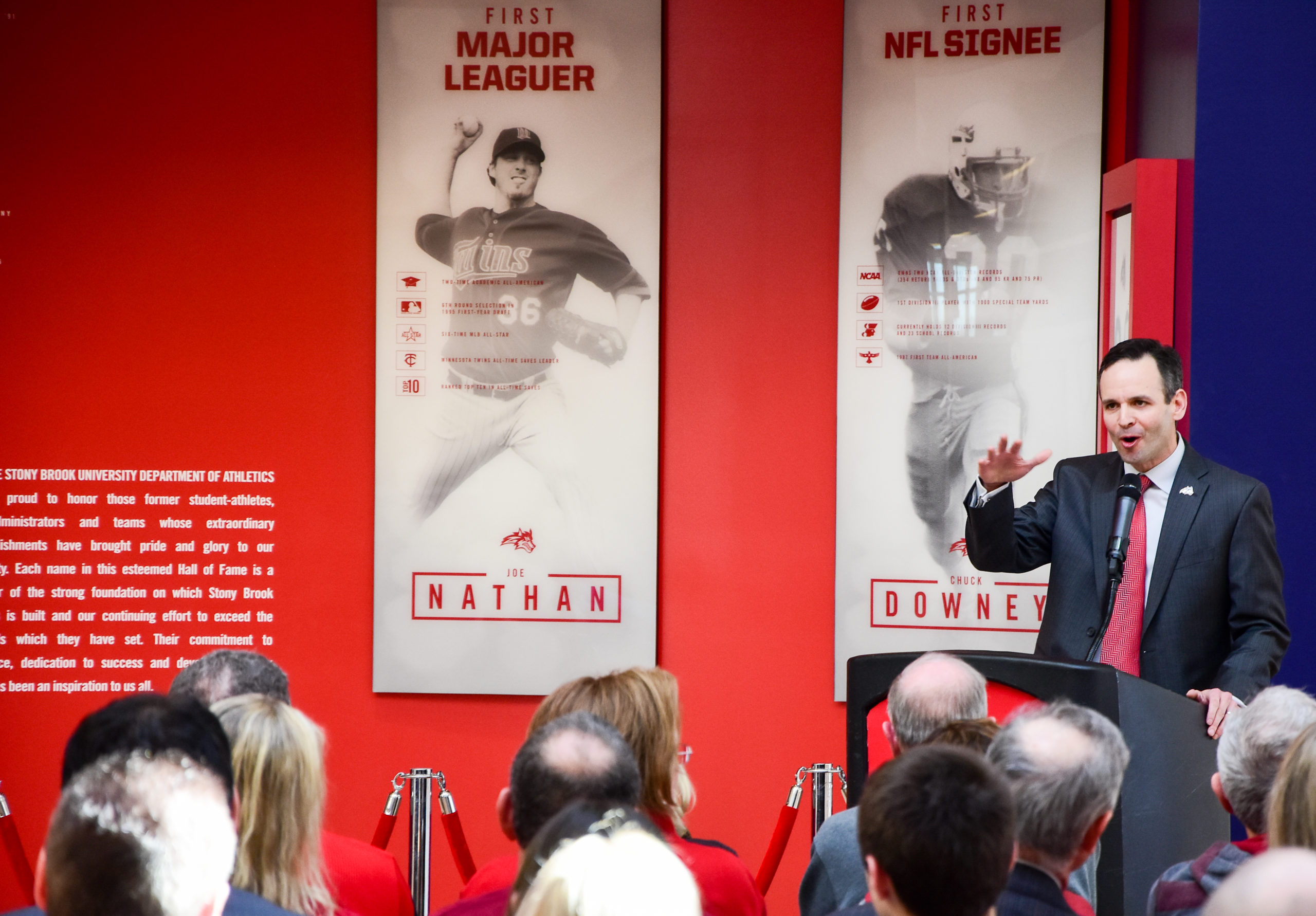 Since his arrival at Stony Brook in 2014, Heilbron says he’s worked to make decisions that benefit the department and campus as a whole, through the lens of creating a first-class student-athlete experience. Right now, that means supporting Seawolves in Need; in the past, it’s meant leading the way in student-athlete welfare.

“We needed to focus on those issues that were important to us. Once we said mental health was important, we looked at what we needed. Counselors in-house, how to pay for it, we figured it out. It was a little bit of realizing where our investments were going to go and then making decisions based on those issues.”

That student-athlete experience mantra also means thinking critically about the future and planning ahead. Their strategic plan, Together We Transform, which was developed five years ago, has allowed his department to remain focused on what’s important.

“Coming in, it was very clear we needed a strategic plan, coming from a perspective of how can we sustain this across all areas within the department, we needed to create the blueprint from a competitive, academic facilities, student athlete’s health and wellness standpoint. What I initially did was really listen to our staff, and then we had our rallying points.”

Those rallying points touch all decisions they make as a department.

Heilbron says the student-athlete GPA at Stony Brook has risen and so have expectations of what they are capable of, as students and as a department. Focusing on the entire student-athlete experience has helped them to level the playing field in other areas as well, including facilities.

“The indoor facility expansion of our football stadium is important. We need football and basketball to be successful because those are propelling us forward, but to me, [being] competitive across the board is critical.”

While Heilbron is proud of the milestones they have reached as a team throughout recent years, he acknowledges that there have been challenges along the way. Getting the Dubin Family Indoor Training Facility off the ground took determination and creativity.

“We needed an indoor facility, that was an absolute have to, given our location and desire to go to a new level, so that was a heavy lift. Obviously, you have to secure a lead gift, then raise money, then build it. That process is a long process. Finally, we are about to complete construction. Also, what it did was show how serious we were about competing on a high level.”

Heilbron says that $4.3 million, 8000 square foot facility sent a message to student-athletes, coaches, and staff that they are a priority.

“We are very good at figuring out how to make things happen that are very important to us. It is important to make decision-based on those foundational elements that are important to us, which I believe lead to success. For example, what are the investments that will have the greatest impact on the largest number of student-athletes? That’s really how we look at things, a rising tide lifts all boats.”

The Dubin Family Athletic Performance Center, coupled with success on the field and in the classroom, undeniably raises the status of Stony Brook athletics and aids with recruitment efforts, especially during unprecedented times.

“Success in football and basketball are important. Campuses around the country are going to be dealing with enrollment issues, we can shine a light on our campus. Getting to the basketball championship is really important for exposure. But for me, it’s that comprehensive success that I think positions Stony Brook with a great deal of strength in the future.”

The true impact of the pandemic, both on-campus culture and campus finances, is still being worked out. However, he and his staff are committed to coming out stronger on the other side.

“The financial impact, we still don’t know, but I think we can be proactive now in positioning ourselves to withstand whatever those challenges may be and, in many ways, help us become a more efficient operation. We can do some things I think will help us and that we can institute to become a stronger and more nimble organization. Being more nimble, that’s going to be the key, whether you are dealing with a global pandemic or just a temporary situation.”