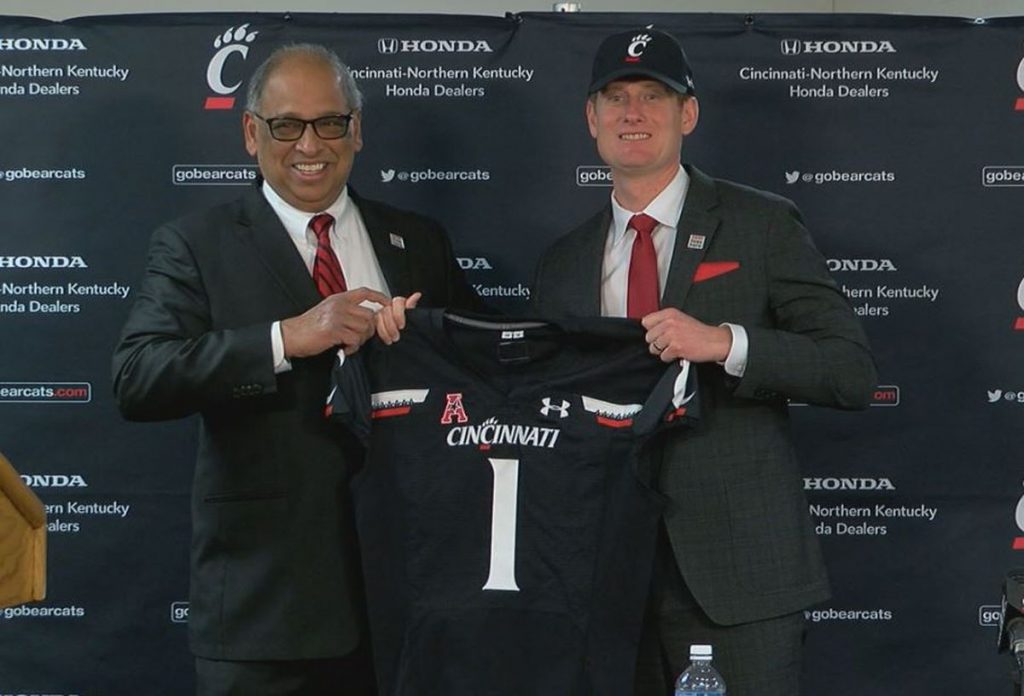 “It’s the whole package when you look at the city, it’s a great fit for my family. When you look at where the city has been going over the past 20 years, it’s remarkable. Then also the president was extremely impressive right away, I knew we were going to be a great fit. I could tell the athletic staff really bought into his vision and the campus had a really good vibe.” – John Cunningham, New Athletic Director, University of Cincinnati

John Cunningham, previously deputy athletics director for administration at the University of Minnesota, was introduced Wednesday as the new AD for Cincinnati. He’s filling the vacancy left from Mike Bohn’s departure for Southern Cal in early November. It’s an opportunity he jumped on as soon as he heard about the position.

“This is one of the best jobs out there in terms of your non-power 5 schools. When I saw the job pop up, I had an opportunity to speak to my athletic director and mentor Mark Coyle, and he said right away, this is the one you want to go after.”

Cunningham joined the Minnesota department of athletics, where his responsibilities included overseeing day-to-day administrative operations, in 2016. He previously served as deputy athletics director at Syracuse and in a variety of roles at Boise State, Texas Christian University, and Maryland. He graduated from TCU in 2001 and returned to his hometown of Lincoln to earn a law degree from the University of Nebraska in 2005. His journey to Cincinnati seems to have prepared him for what’s to come.

“I certainly have in my head the things we need to address in terms of getting to know everybody and building those relationships. I don’t have a specific 100-day plan; I do think that one of the things that I’ve learned along the way is every place is different; every place is unique. Every place has immediate needs, and that’s really what I’m looking for as I step into the athletic director position.”

At Cincinnati, Cunningham will lead an athletics program that includes 19 varsity sports and over 500 student-athletes. He’ll supervise a staff of approximately 166 and manage an annual budget of $64 Million. Cunningham tells CollegeAD he’s looking forward to building on the success already in place.

“When you look at Cincinnati and the success that they’ve had, bowl games and tournament experiences, you just don’t see a lot of schools with that kind of sustained success.” He also adds that his first days will be filled with understanding immediate needs. “Understanding if there are things I need to be fully engaged in, that’s something that I talk to the staff about – if there is something right now that I need to know about. I want to make sure I triage the things that are most important.”

John Cunningham’s first day in his new office will be just after the holidays on January 3rd.