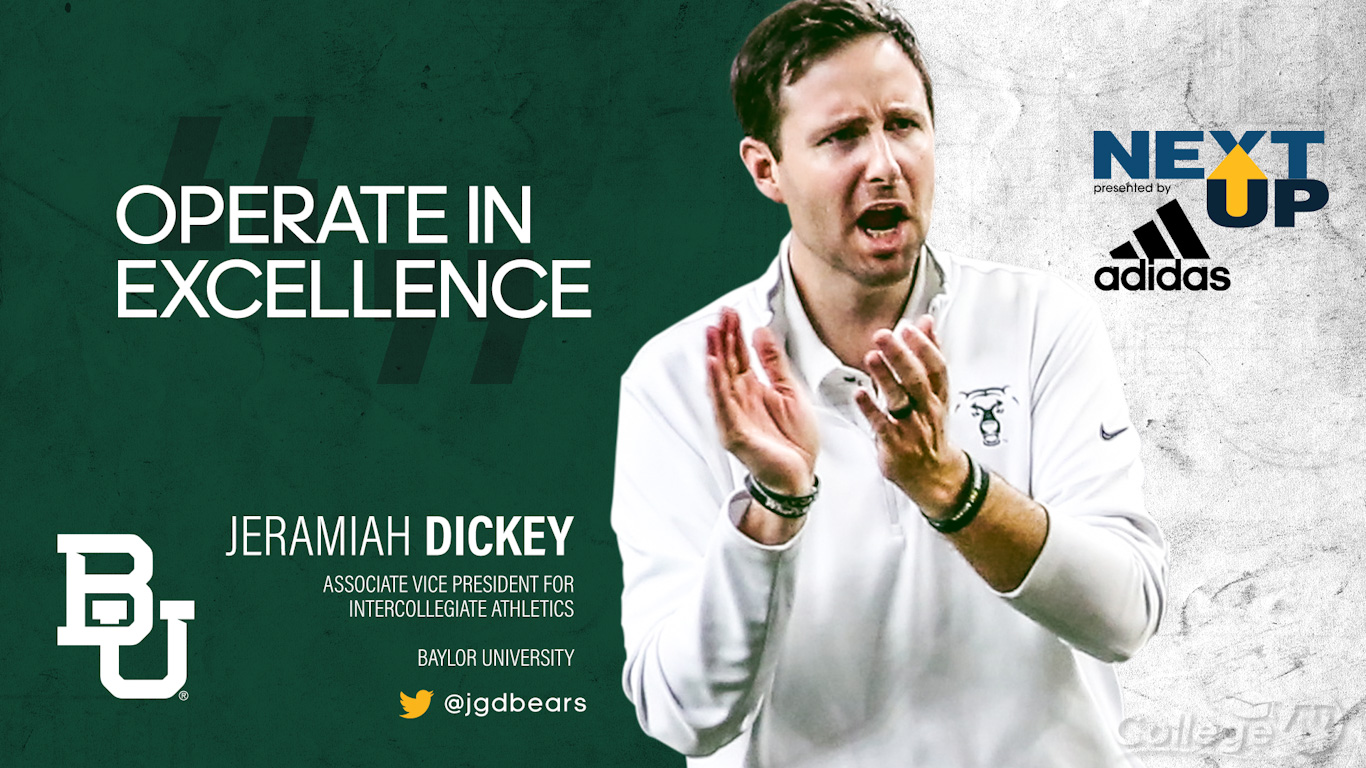 “At a young age, I realized if I work hard enough at something, then I can accomplish anything. That comes from my parents. You know at 14, I went out for the basketball team and did not make the team; I sat on the bench and was basically a glorified manager. It was a hard lesson, but through practice and conversations with the coach, by the end of the season, I was starting. It wasn’t due to my athletic ability; it was hard work and dedication to the process.” -Jeramiah Dickey

That perseverance, that drive to OPERATE IN EXCELLENCE, and that will to never quit has earned Jeramiah Dickey a coveted spot at Baylor University as Associate Vice President for Intercollegiate Athletics, a position he seems suited for. He won’t let fear of the unknown keep his team from achieving.

“As long as we keep working at it, we will collectively meet our goals,” he says.  “I can live with mistakes. I cannot live with us operating in fear. Fear of mistakes, fear of failure has no place.”

He wants everyone working at their best, and he uses his position to help his team have an impact on the daily lives of Baylor’s student-athletes.

“I tell my team all of the time that I will protect and promote. I take responsibility for them, for the entire team. We are in this together.”

Dickey provides leadership in various facets within the department while serving as sports program administrator for select programs, keeping his vision laser-focused on the department’s strategic initiatives, goals and objectives.

“To me, I define success as doing my absolute best and having a positive impact on those around me. My job is to inspire our team to think in ways they’ve never considered. My goal every day is to give my absolute best effort, knowing that it may fall short. But if we strive for excellence, we will get there.”

However, falling short isn’t something Dickey has to contend with often. Before joining Baylor in 2017, Dickey worked at the University of Houston as the Deputy Athletics Director. Cougar Pride established fundraising records in seven-consecutive years under his leadership. Dickey was also instrumental in securing the University of Houston a 10-year, $15M naming rights partnership with TDECU, an agreement ranked third nationally among all collegiate facilities for corporate naming agreements. His drive to persevere is something that comes with him to the office day after day.

“My family, my faith and my passion for the team drive me. If I did not have the support of my wife and three kids, I could not show up and be my best every day. My faith is also important to me. If I don’t concentrate on those two things, then whatever I am to my team is not enough,” says Dickey.

As he explains, it isn’t always easy to keep the bar so high for himself and his team, but with a clear head he can focus on what’s truly important.

“I have dad guilt that I struggle with. I have three kids under the age of 5 at home, so it’s forced me to prioritize and use my time efficiently at the office. It really puts things in perspective. It’s helped me become a better leader to be more intentional with my time.”

Jeramiah Dickey’s perseverance and attention to details that matter make him an exceptional leader. We are thrilled to have him as one of this year’s NEXT UP honorees.