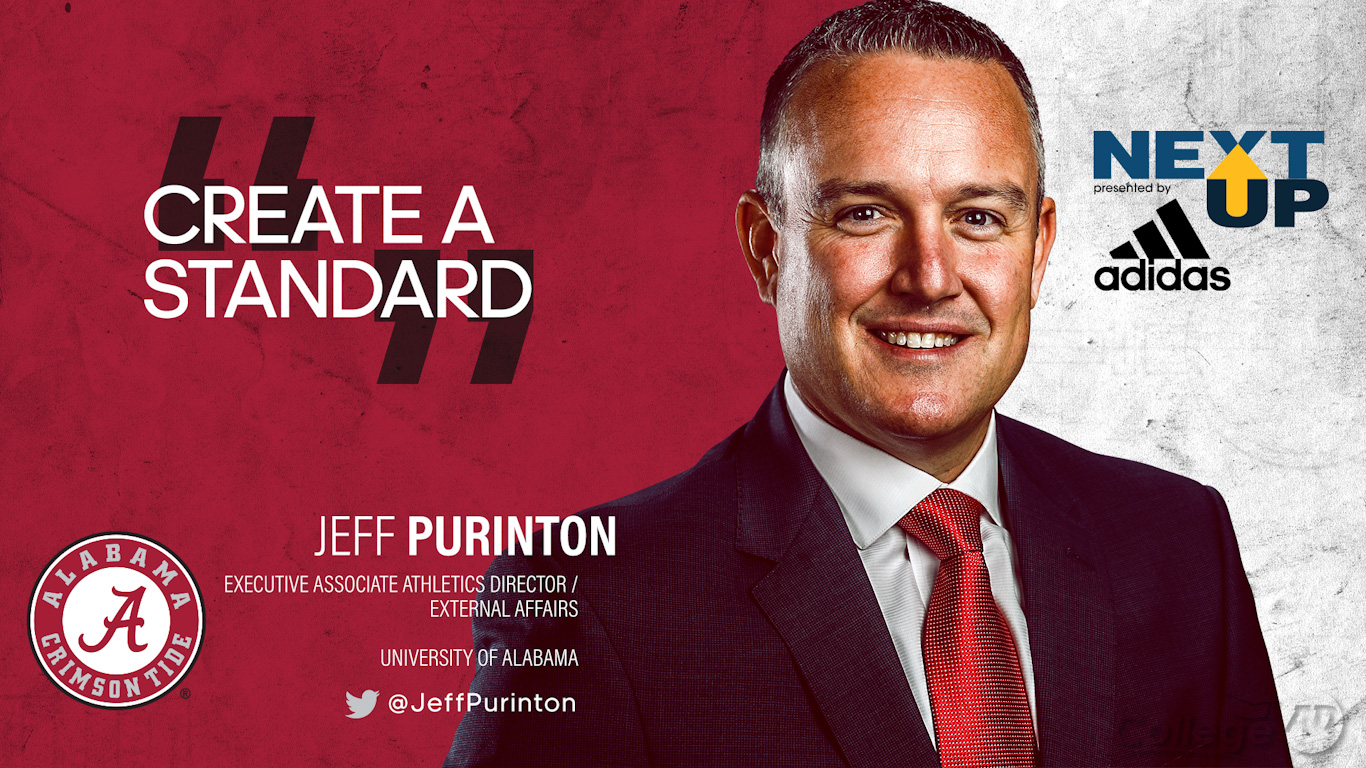 “Since I was a little kid, I’ve always loved athletics and sports, even as a family. Any kind of get together, there would always be a game; it was a huge part of growing up. I always knew I wanted to be involved, but as I grew up, I knew it may not involve competing.” -Jeff Purinton

Jeff Purinton added that last part with a bit of a chuckle, but his love of athletics would not be trumped by what he perceived as a lack of natural ability on his part. Sports and athletics are a part of his DNA, and he uses that love of all “games” to motivate his team and CREATE A STANDARD as the Executive Associate Athletics Director, External Operations at the University of Alabama.

“You have to motivate by example, and you have to realize not everyone is motivated by the same thing. But leading by example is one tool everyone can apply in their own lives,” explains Purinton.

And he has set quite the example. Before his time at Alabama, Purinton handled all press operations for the Orange Bowl Committee in 2006-07 and spent 13 years in the Sports Information Department at Florida State University.

“I’ve been fortunate to learn from two of the greatest motivators: Coach Bowden and Coach Saban. Their team and staff would run through a wall for these men, because they know they both had their best interest in mind. You cannot be a great leader if you don’t care for other people.”

It hasn’t always been easy for him; he’s learned a lot along the way. He recounted his first big move away from home. As a Florida State grad, then working for the university, he spent his life in Tallahassee. When the opportunity to work in Miami with the Orange Bowl came along, it was tough to leave the comfort behind, but he knew needed to grow and create another experience.

“You can let your focus stray. I needed a kick in the pants and got one from my AD at the time. He told me I was capable, and I believed him. You need to keep your eye on the bigger picture.”

Purinton says he tries to lead his team by not only his example, but also by capturing and touting their collective success. He knows he’s not in this alone; there’s a group of people behind him who have to make their own way in athletics.

“It’s not my success; it’s our success,” he explains. “I look at my job here as to help others reach their potential. When that happens, you have success.”

He says, for him personally, he feels most proud when a student-athlete or staff member says the athletic department has helped them have a great experience, that is the ultimate reward.

“It’s about them. If we helped a student in their athletic career or earn their degree, or if we helped someone reach their potential, that’s personal success for me.”

Purinton explains the best part of his job is the student-athletes. He says he loves being around the potential these young people have at their fingertips. Seeing them go on to launch their careers and start families of their own is one of his driving forces, and, of course, there’s the love of competition.

“I love seeing what competition means to everybody. It gets everyone involved in a singular goal. The student-athletes, the coaches, the staff, the fans, everyone is so invested in a university that means so much to them. It’s special to be around that level of competition.”

That love of competition, and what it can bring out in people, is something he learned from his own parents years ago, and now he’s passing on to his daughters.

“I don’t let them win,” he says with a laugh. “That’s part of the lesson, just learning to love the sport of it all. Just trying and learning and growing from there.”

Motivating by example is clearly something that Jeff Purinton doesn’t just leave at the office, and that’s why we are to count him as one of our NEXT UP honorees.