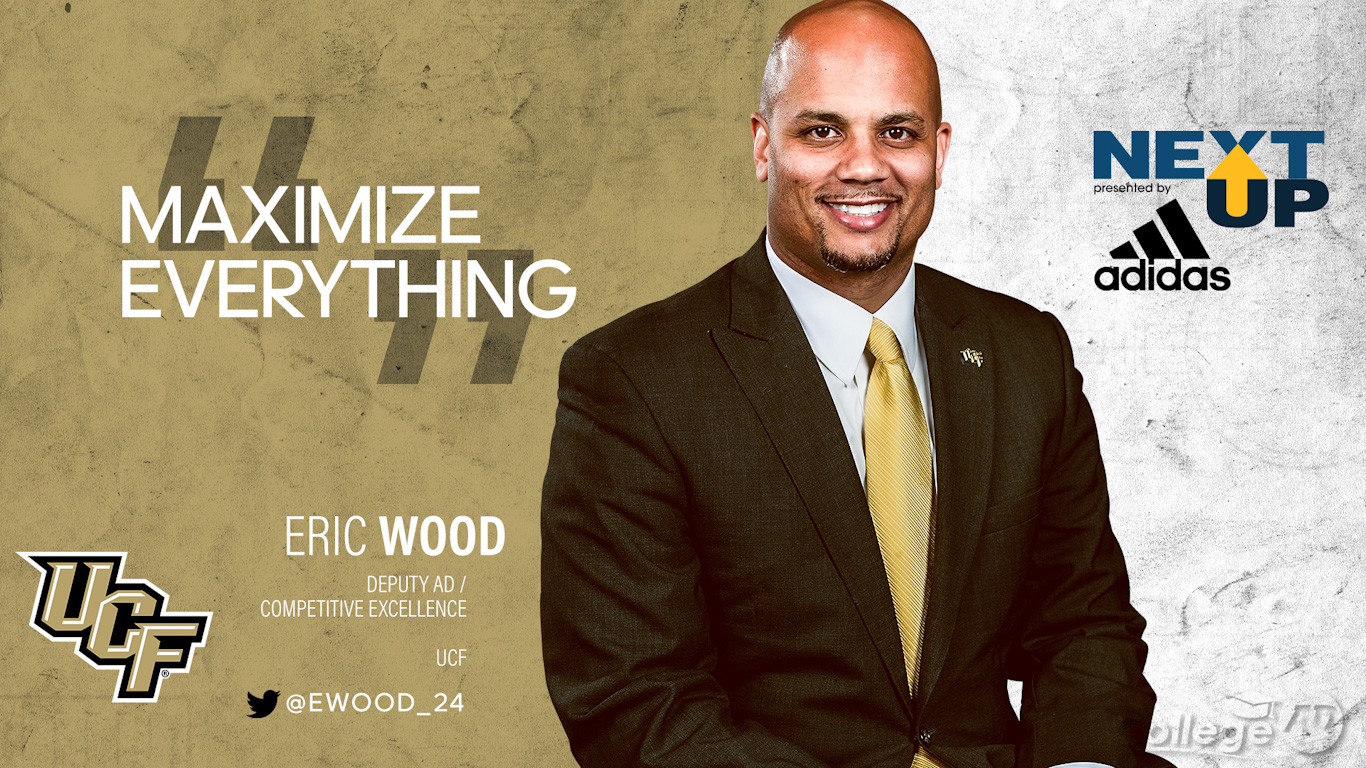 “You know, I’m an inner-city kid from the Bronx, and my mom instilled in me discipline and the outlook of seeing the bigger picture. She set me up to really understand what can be achieved.” -Eric Wood

Eric Wood, Ph.D., is not joking around when he says his mom is the one who “put his head on straight.” He credits his upbringing and one particular incident from his childhood that forced him to look at the “bigger picture” of life and his career.

“I’ve been playing football since I was eight years old. In seventh grade, I failed a social studies exam by one point and my mom had been warning me that she would hold me accountable. She made me dress up and go to the game and told the coach to sideline me because I did not hold up my end of the bargain. That accountability is something that changed my life and I carry with me every day.”

His ability to hold himself accountable has enabled him to do the things he must to achieve the goals he sets. Wood was announced as the Knights’ Senior Associate Athletics Director for Academic Services in 2016 and was quickly promoted to Deputy Athletics Director for Competitive Excellence the following year. He says relationships are the key to getting others to achieve their own greatness.

“Building trust and relationships is paramount. I want to know what motivates them, what their ultimate dreams are. I take the approach as a supervisor to remove barriers,” Wood says. “I believe in the old adage, ‘If you love ‘em hard, you can coach ‘em hard.’ Hold people accountable to what they said they want to accomplish.”

Wood serves as sport administrator for men’s basketball and men’s and women’s tennis. He has administrative oversight of the Knights’ Sports Performance department, the internal administrators’ group, head coaches’ meetings, Academic Services for Student-Athletes (ASSA) and Sr. Staff. Holding people accountable to their own standards is a powerful tool that helps him lead his team.

“When I’ve built that relationship, when I know that person and I’ve heard their own goals, if I’ve been doing my job right, if I’ve been encouraging them, it’s easier to hold them accountable to their own aspirations. That how I motivate, to make sure they are set up to succeed.”

Everything Wood tackles, he enters with the mindset to do his best. A 2009 graduate of the NCAA’s Leadership Institute, Wood came to UCF after a seven-year stint at The University of Arkansas where he began as Assistant Athletics Director for Student-Athlete Development, and was promoted to Associate Athletic Director for Student-Athlete Services in 2011. He’s programmed to strive for high goals and help others meet their own goals along the way.

“I know if I’ve prepared and done it with integrity, I’m not so concerned with the outcome. If I’ve thought it through and doing the right thing, professionally, if I’ve given my best effort, I’m comfortable to let things fall where they may. I’m a maximum effort guy; hard work pays off.”

Wood has put forth tremendous effort in his career. He completed his master’s in counseling and guidance services at Clemson University in May 2000 and his Doctorate of Education in Sports Management at the University of Arkansas in 2016. Although he acknowledges he’s a fierce competitor, he wants people to know his greatest competition is himself.

“I want to be better than I was the last time at everything. What drives me, is to MAXIMIZE EVERYTHING. My God-given talent, looking within and seeing what I can do better each and every time.”

His drive, example and ability to hold people accountable to themselves makes Eric Wood a huge asset to any team he’s a part of. We are privileged to celebrate him as a NEXT UP honoree.