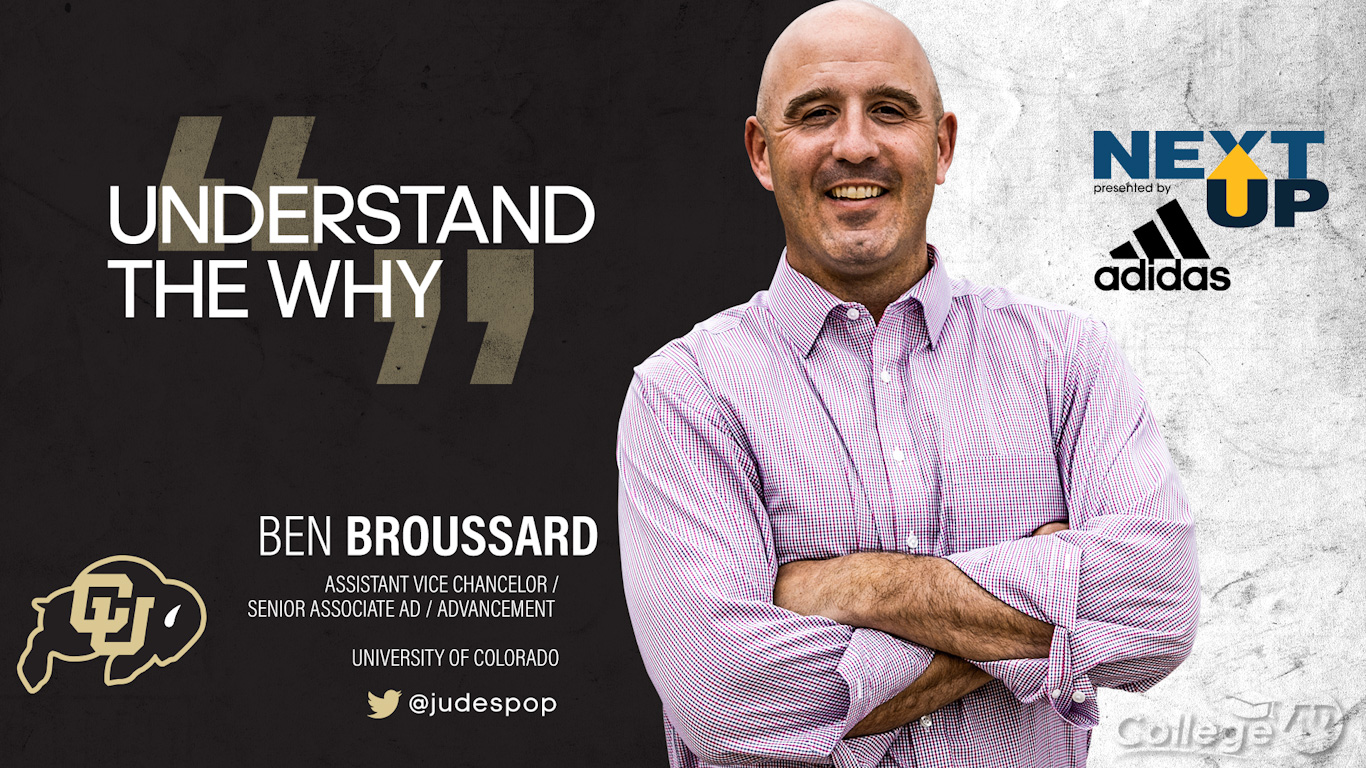 “My mom did a great job encouraging me to be the best student and athlete that I could be. She had me young, and for a long time it was just us. Then she married a man when I was about 12, that I call my dad. I had this intelligent guidance from a man that saw the world differently than I did.” -Ben Broussard

Ben Broussard says that guidance and encouragement to see the world from a different point of view is one of the defining influences on his life. It’s let him gravitate to great people and mentors that have helped him rise to the position of Assistant Vice Chancellor and Senior Associate AD at the University of Colorado.

“These people have provided me with different paths to travel down other than the ones I felt were predetermined. Along the way I’ve found wonderful people to continue that guidance in my career and personal life,” explains Broussard.

Broussard joined the University of Colorado in 2017. On top of his duties as Assistant Vice Chancellor and Associate Athletic Director, he also oversees the Buff Club, the athletic department’s fundraising arm. Broussard says his team always rallies because he keeps them well informed.

“If they UNDERSTAND THE WHY of the mission- too often people are just told to get something done, but that ‘why’ piece is inherent to us. If you tell your team why something is important and who it will impact, then the buy-in for it is exponentially easier to get.”

Broussard explains that keeping everyone informed with a proper flow of communication makes his team ready to tackle any mission. To be able to show them constant progress is something that will always keep people motivated to do even more.

“When people are ahead of things, don’t take it for granted. Show appreciation and let them know. I worked under Major General Ron Richard, he was the head of the Tiger Athletic Foundation, and he said something that really stuck with me: ‘Ask yourself, “What do I know, who needs to know it, and have I told them?”’”

Before heading to Colorado, he was Vice President for Development at LSU. While with the Tigers, he accomplished several major goals, including developing and implementing a marketing and sales strategy that led to the sale of over $45 million in premium seat inventory and executing a strategy that raised over $90 million philanthropically from 2014-17 for the needs of LSU.

“I tend to measure success two ways, have I given more back to the world and institution than I’ve taken? It’s the reason leaders last, it’s the reason you take every phone call from the person trying to get where you are,” Broussard says. “And two, I’m a checklist guy. Every morning I take a look at my checklist from the day before. At the end of the day or project, if I have a list full of check marks, I feel successful.”

However, that feeling of success doesn’t stop when he steps off of campus. His greatest joy is to see the people around him succeed, especially his children.

“It’s a great joy to see them do well. That is the ultimate feeling. Doing what we do, your career path may mean a ton of time away from your family, but it also provides you with a ton of opportunities to spend quality time with them at your office. I do what I can to see those guys do well,” Broussard explains.

Ben Broussard is constantly measuring his progress and touting the success of others, and for that we are happy to count him among our NEXT UP honorees.