Powered by Nevco, A New Gameday from CollegeAD focuses on how athletic departments are working towards, planning for, and hosting events during COVID-19. 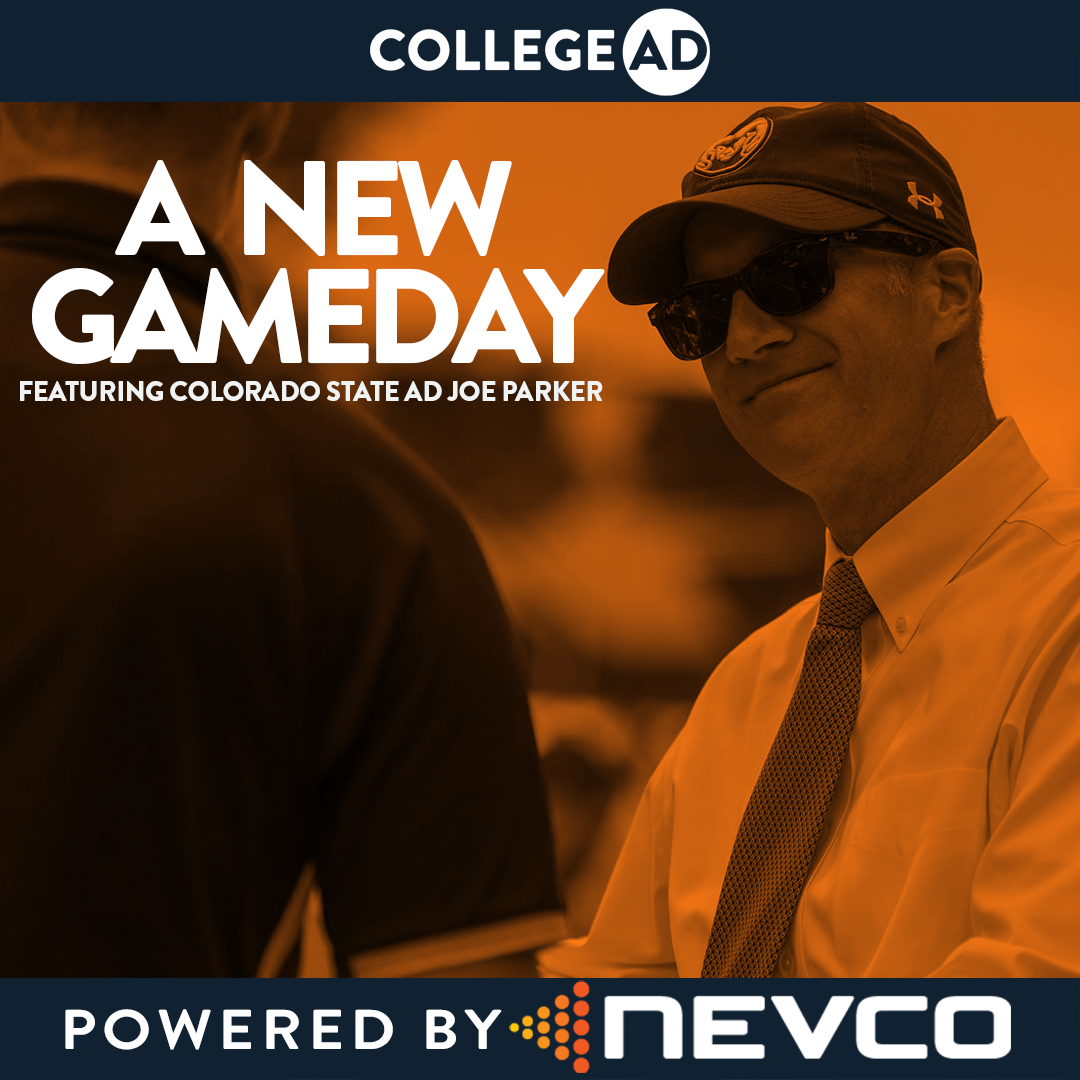 Joe Parker has served as Colorado State’s Director of Athletics since his appointment in March of 2015. He joined Game Day to talk about the setbacks and opportunities of 2020 and keeping up a strong department ready to emerge from a challenging year.

Parker started the conversation by saying that they’ve had a good fall semester in Fort Collins. Recently students switch back to virtual learning, he says his department is working to stay focused on the weeks and months ahead.

Looking back to March, Joe Parker explains that after March Madness and spring sports shutdown, his team had to quickly ensure that their students made the smooth transition to virtual learning.

“Some of them went home where internet connections weren’t as solid as they would have been here in town. It was a triage effort on the part of our academic staff, just to make sure that students had connectivity to continue with their classwork. That was a, a strong partnership between our student-athlete support services staff and our coaches. They were in constant communication and it created a triangle between student, coach, and academic counselor.”

Parker says the university formed the PPT or Pandemic Preparedness Team. He says the PPT is a diverse group of professionals across the institution. It’s also the core group that his department works with on a weekly basis, starting in April.

“We began to return to campus in early June, starting with the football program. We’ve got great partnerships in the community for healthcare, for our student-athletes, with OCR, which is the orthopedic and spine center of the Rockies. They provide our orthopedic care and also our primary care to our student-athletes. And then UC health has been a 30-year partner. They helped us put together our first testing program for COVID and we’re able to do that onsite.”

He says that football was the first program to be up and running during the pandemic. Joe Parker says they built Canvas Stadium three years ago, and the outdoor facility has proven to be versatile during this time.

“Football was the first comeback and our strength conditioning staff got very creative. All of the data said that transmission was less likely if you’re outdoors in open air. And we’re fortunate that we’ve got Canvas Stadium, the design of the building was a huge advantage for us. We moved all of our weight equipment up to the covered concourses. They designed up a pathway for students to get into the stadium to do their lifting sessions. Then move back down to the field level, so they could space out and do their cardio work on the field, and then walk out.”

Parker praised his team for coming with a great plan and design for workouts and says the return to football has served as a template for other programs. He explained that his staff took the time this summer to explain to the student-athletes how important these protocols had become.

“They’re 18 to 22, 23 years old. And they’ve got a lot of other interests. We recognized that was going to be our challenge through the summer and through the fall just trying to get them to understand the responsibility they had to themselves and each other.”

Parker says that he relied on his entire team to keep fans and donors in the loop during the chaotic summer months.

“We’re lucky here at CSU. We’ve got a group of really talented people across the entire department, but our external operations, they’ve always worked in a very coordinated, strategic effort to keep up all the initiatives that they’re involved with working in a cohesive manner. We really had to step back a little bit and think about that engagement aspect of keeping people connected to us without being able to gather in place.”

He says they started to think about what they could do and eventually fell into a rhythm with the new way of approaching challenges.

“We got into a strong rhythm of virtual meetings. Large group, small group, town hall formats. More intimate, happy hours and try to utilize all of our coaching personalities to give people access. That became a big part of what we were doing. Our team also was able to pull some of our greatest games out of the archives and, and do some really nice streaming opportunities.”

Joe Parker explains what they learned setting up for the return of football has helped them prepare for basketball season. But there were aspects that had to be worked out.

“From football to basketball, we’re moving into the arena space and it’s smaller and it’s indoors. And then also, both the basketball programs faced the availability of people issues. The people who have historically helped us conduct a game day, have been volunteers, those are typically retirees.  So that puts them in an age demographic that is higher risk. They had to make choices, many of them made the absolute right choice that this is a year that they should just kind of pause. Our facility staff had to go out and find new people and train those people. It was a bit of a ground zero operation, build from the bottom up.”

He says that while some areas of revenue are lower this year, like ticket sales and concessions, he and his team have managed to find some unique revenue-generating opportunities.

“Our business model is gathering people in place. And so that was taken away from us. How have we adapted? “On the donor side, we immediately got on the phones and had our teams calling doing direct outreach and engaging with our fans to get them to understand the challenges that we are going to be facing. We were working to convert their commitment for this academic year to a full outright gift if it was ticket associated, or at least keep it in the bank, so to speak so that we could have those funds in place.”

He says they really did well with that approach and were able to secure more than $4 million, but it did require modifying what they could offer in return.

“We created an inventory; we added a new weekly radio show. We did a lot of things online that became sponsorable elements for our supporting partners. Through all those conversations and the creativity of that team, coupled with our own internal team, we were able to come up with really great substitutable inventory.”

Parker says the one message he’s been trying to drive home to everyone, student-athletes, staff, fans, and sponsors is one of getting comfortable with the unknown.

“I settled it on this message early. This year, we’re going to have to accept that it’s a year that’s compromised in every way. We have to get comfortable within the ambiguity and be adaptable. The finish line is somewhere, probably in 2021. At that moment in time, we want to be able to look back and recognize that we’ve kept talent in place. We’ve protected the security of our rosters. We wanted to create an experience that allowed students to develop in every dimension of their life. That’s been the message, let’s link arms. Let’s make sure that we move to the other side of this together.”