Powered by Nevco, A New Gameday from CollegeAD focuses on how athletic departments are working towards the eventual return of sports and what that will look like on gameday. Colonial Athletic Association Commissioner Joe D’Antonio joins this week’s show. 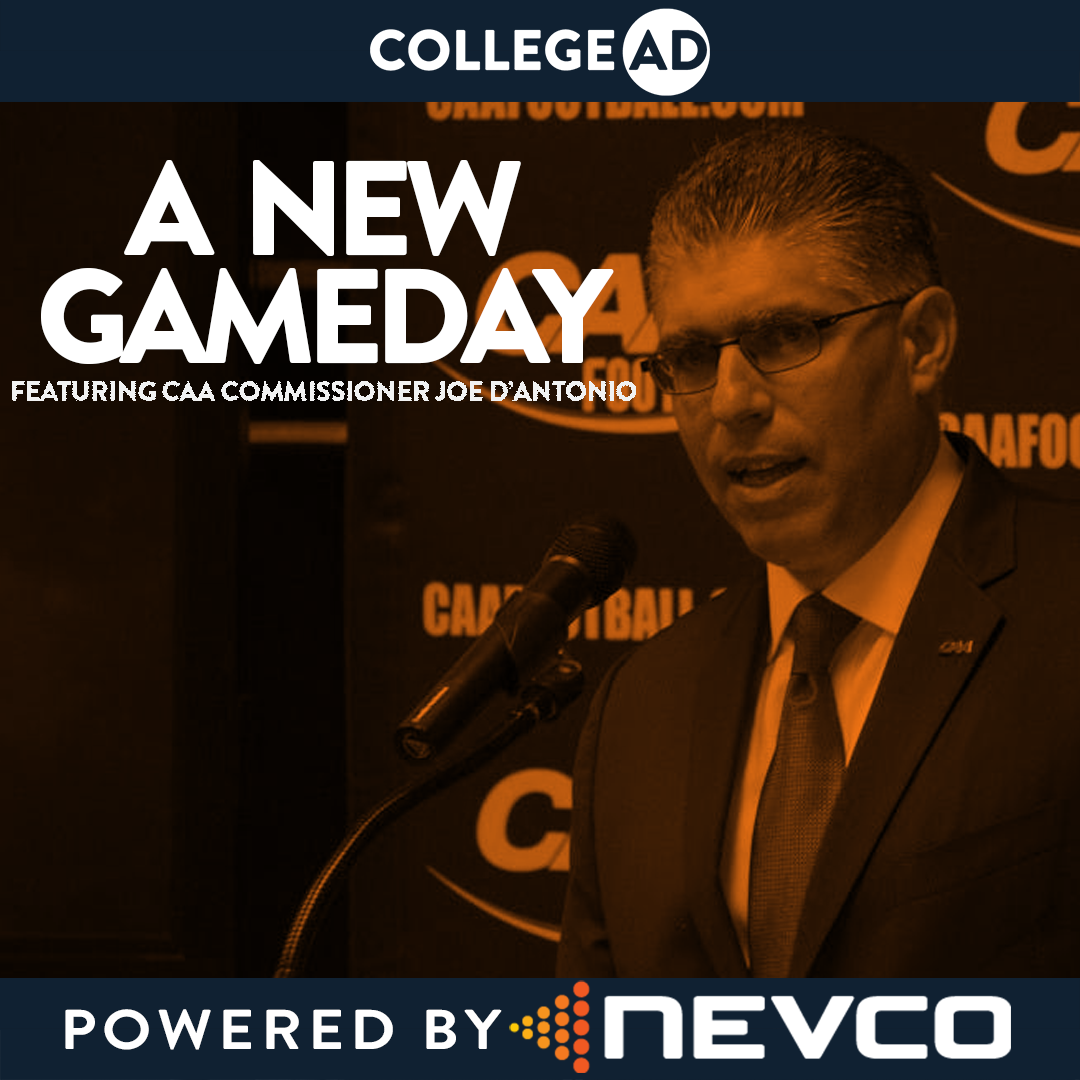 Joe D’Antonio is in his fourth year as commissioner of the CAA, becoming just the second person to serve in that role at the conference. He joins us to talk about the decisions facing the CAA and the hurdles they must overcome in the near future.

He started the conversation by saying that everyone at the Colonial Athletic Association is doing well despite the unusual circumstances of the past year. He said, going back to march, they were pretty fortunate to get their men’s tournament in, but did have to abruptly cancel the women’s tournament due to the coronavirus.

“I remember sending an email to our membership saying if the NCAA cancels the men’s or women’s basketball tournament then our tournament will be canceled, no matter what spot we’re in. As we moved into that next day, it wasn’t the NCAA canceling tournaments, it was other conferences.”

He said they were watching the ACC because they were playing their men’s tournament nearby, they had a game scheduled and pulled those teams off the floor around noon. D’Antonio says he was on the phone with athletic directors and the board and they decided it was in their best interest to cancel the rest of the tournament.

“At that time the decision was actually to postpone, then obviously when the NCAA made the decision to cancel a day later, that when we as a conference, decided to cancel our spring championships as well.”

Next, Joe D’Antonio explained their most recent decision about fall sports. CAA Football voted to suspend conference competition in the Fall of 2020. Taking into account the Conference’s composition, 12 institutions that compete in other sports in four Division I Conferences and the geographical expansion of the Conference membership, the Conference’s Board of Directors allowed member institutions the ability to explore the option of pursuing playing an independent football schedule in the Fall of 2020. The CAA also let their full member schools, ten institutions located across eight states, make the decision on whether or not to play.

At the time, he explained, at least four of their ten CAA members had plans to continue fall sports, but since then all ten schools have opted to cancel or delay fall competition. He says they did provide that flexibility for institutions to make their own decisions, he felt that in a period of great unknown, he knew there would be different reasons that different institutions needed to make decisions.

“In normal times conferences should very much act together, but there came a point in time during these unprecedented events that we had to add flexibility. None of us have the right answers, none of us had the wrong answers.”

Next, the conversation turned to how D’Antonio tackled leadership during the crisis. He explained that he tried to stick to his principles as a person and treat people fairly, knowing that things will work out in the end.

“I know that not every decision I made was looked at in a positive light by everybody, there was criticism. I learned from mistakes, but I think we ended up in the right spot. If I had to do it again, I may change the way some of the processes unfolded, but certainly never gave up on my principles. For many of us, this has been a learning experience, whether you’re a commissioner, AD, president, a professor, a coach, I think we are all in the same boat and we all learned a lot from this.”

D’Antonio says the key things for him as we move toward the winter and spring is that the NCAA has left open the possibility that fall championships can be held in the spring. He explains we all have to overcome hurdles and be in a different spot than we are right now.

D’Antonio said, if we’re optimistic that we will be in a different place come February, whether through a vaccine or better testing, then it is possible to tackle both fall sports in the spring and winter and spring sports in the time period they are normally played.

“Will it be a big undertaking, yes. Can it be done? In my mind, if we can get over that first hurdle, it absolutely can be done.”

When competition does return for the CAA, what will the new gameday look like? D’Antonio says by the time they get to running college championships things will have to be different. He explained they are already having conversations about what testing protocols could look like, what venue and arena signage could possibly look like, and what broadcasting capabilities might look like.  He said their planning model will maintain itself through the spring.

“There will be a bunch of things to look at, but I’ll be honest with you, some of the planning we’ve done will ultimately coincide with what’s happening at that point in time. What I mean by that is, while we’ve planned for certain testing protocols, those could potentially change if testing is different. That is some of the angst that we’ve dealt with in this process. You can plan, plan, plan, but the reality is, as we move into these scenarios, we need to be focused on what’s happening in that moment in time and make the best decision.”

Joe D’Antonio says the one message he’s driving home is the safety of student-athletes, coaches, administrators and fans is the top priority in all the decisions that are being made by the CAA. He says they can be stronger and better on the other side of this crisis through planning.

“We need to come out of this prepared to hit the ground running and ready to go. We continue to hope this is an anomaly, but we know the financial constraints could be with us for years to come but we can overcome those and find new ways to do things.”