Powered by Nevco, A New Gameday from CollegeAD focuses on how athletic departments are working towards the eventual return of sports and what that will look like on gameday. Dr. Joel Erdmann who serves as the Director of Athletics at South Alabama joins the podcast to discuss opening a new stadium amid a pandemic, communication, revenue generation, and more. 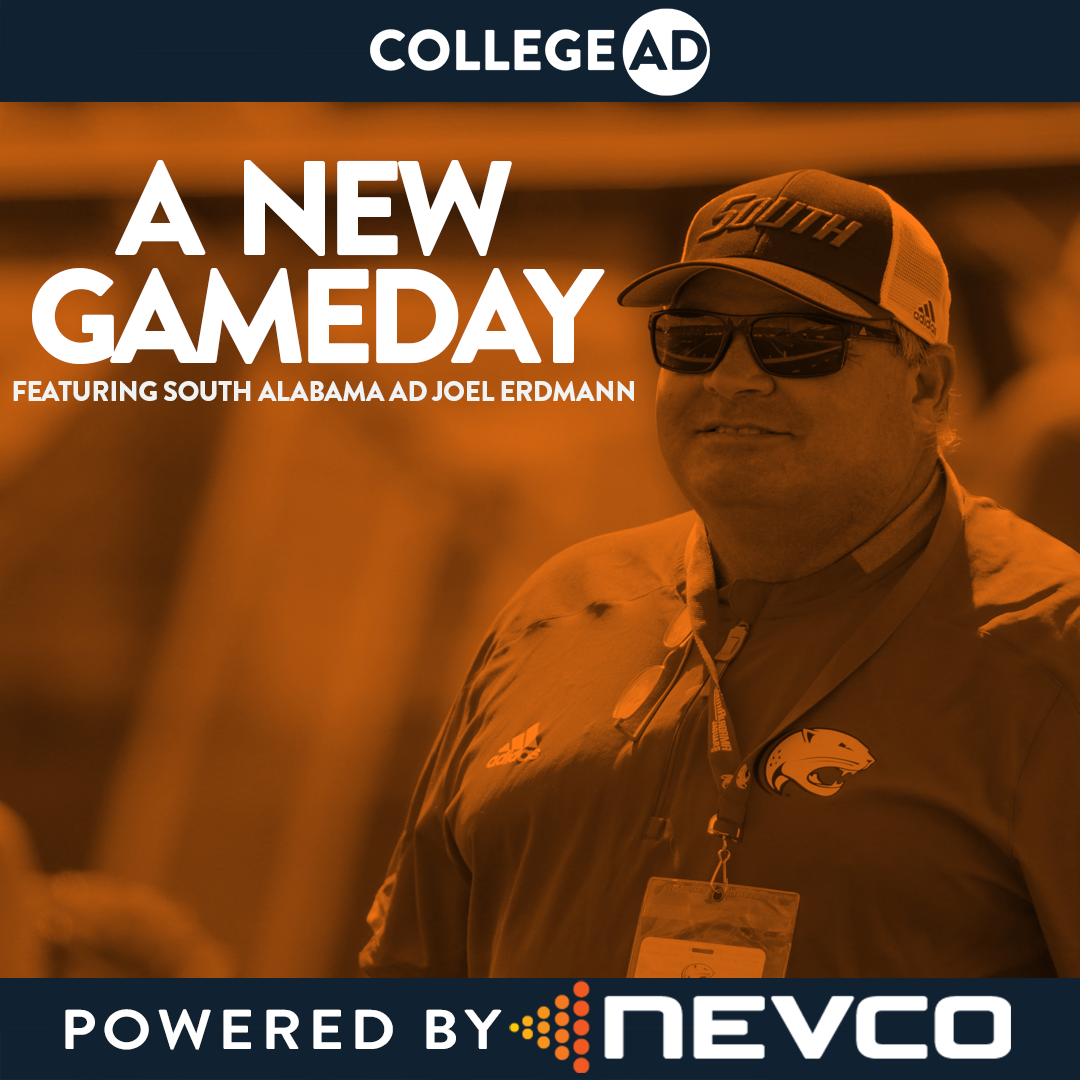 Dr. Joel Erdmann, who recently wrapped up his 11th year at the helm of the South Alabama athletic department, started the conversation by explaining he and staff have tried to be continuous and consistent in their messaging with coaches, student-athletes, and fans. Being a member of the President’s Council, he’s tried to keep the lines of communication open between his staff. Erdmann said the communication has been more than just updates on COVID, it’s also centered around the state of education and civil unrest in parts of the country. He also said they’ve kept in communication with their fans in various ways such as direct email, video, and podcast programming.

Dr. Joel Erdmann believes that open communication will be the key to the coming months. He believes that people are more at rest when they know what’s going on and being transparent lends a certain amount of security to people.

The conversation then pivoted to a new program the department has launched during the pandemic, Jag Bytes. The weekly virtual lunch allows the South Alabama department to can connect with fans via social media. He said it was the brainchild of his Assistant AD, Megan MacLeod, and was intended to keep people engaged. He said his coaches have been eager to keep people up-to-date in their programs and Jag Bytes has also included updates on the stadium construction. He explained that over the past couple of years South Alabama has really developed their social media platforms. Dr. Erdmann noted that because of the pandemic they’ve had time on their hands, not managing games, not getting on the road, and creating a bit of a void to fill, and the folks that work in creative services have been very effective.

Erdmann also explained they have sports programs that have been very active on social media as well and they coordinate closely with the marketing team. Plus, his department also works closely with the university’s social media to form a team that’s in constant communication about their message.

Next, the conversation turned to how these new investments in social media might translate to game day at Hancock Whitney Stadium. Dr. Joel Erdmann explained that while they were designing the new 25,000 seat facility, they realized how much of a shift has occurred in the way that people engage with sports, even in person. Erdmann said they recognized that most people will not just want to sit in a chair for three hours and watch a game, they want to socialize, to mix and mingle. Now with the pandemic, those priorities will shift and his team will have to pivot to making the stadium safe with social distancing in mind.

He said that this year people will have limited access to the traditional components of gameday. While the terms have not been defined yet, he said they may have a playing field that is only players and coaches. He explained that the on-field promotions will probably not happen the way everyone is used to them happening.  His plan is to capitalize on other components like their video board and social media as much as possible. He hopes to create an environment that is unique and rich with fan interaction, rich with color and sounds and brings the fabric and experience of the game out– even through what we all consider traditional college football may not look the same this year.

He said the people who work in their social media areas are skilled with image and branding and can translate the look and feel of game day and make people feel a part of what’s happening. He says they need to be creative in the realm of revenue because this will not be a traditional year. He said revenue production over the next months will be difficult. He expects that ticket revenue, donor revenue, and philanthropic giving will be down and Erdmann says they will have to shape and mold their requests of their donors and customers to stay committed.

Finally, Dr. Erdmann closed by saying his main message for everyone in his department as well as fans and donors is that everything will be OK. He believes everyone will make it through this and get to the other side, but everyone will have to have a degree of tolerance and flexibility.